THE TOWER
The tower of St Peter’s church looks down upon John Bunyan’s statue, the main structure of the Tower contains some important Anglo-Saxon work and gives an immediate impression of great age. It has been suggested that evidence of great heat on some of the stonework may be attributable to a period when the town was ransacked by the Danes. 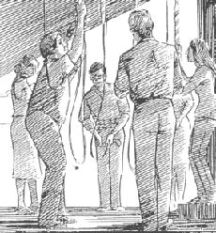 The exterior of the Tower was subjected to major building work during the Victorian period when the church was extended. The spiral staircase, giving external access to the tower on the south side of the church was added, and a new door provided into the tower. Previously access had been via a ladder into a doorway on the north side of the Tower. That doorway still exists in the belfry, overlooking the roof of the church. During this work the chancel was rebuilt and considerably enlarged, at this time it was discovered that a Saxon doorway existed, complete with Rune stone. This doorway now exists in the belfry and looks down on the Altar.

The Tower is possibly the oldest surviving structure in Bedford.

BRIEF HISTORY OF THE BELLS

1895
Between the period 1825 to 1894 there were 5 bells in existence. It was said that they did not hang very harmoniously together, and by 1894 the second lightest of these bells was cracked. It was decided that Taylors Bellfounders in Loughborough should recast them into a ring of 6 bells with added metal. The churchwardens were present at the foundry to see the old bells broken up and melted down before recasting.

The bells were hung by Taylor’s with modern fittings in a new cast iron h frame, and dedicated on 31st January 1895. The preacher at the dedication service was the Rev W.C.C. Baker, Secretary of the Bedfordshire Association of Bellringers, which was formed in 1893.

The recast ring of 6 bells retained the inscriptions of the original bells. The cost of the work was £330, although today the cost would be in excess of £100,000.

1825
A Peal of 4 bells were in existence and were retained until the recasting of 1894. However at this time a 5th bell was purchased and one existing bell was recast.

Number 1 Bell
Recast at Oxford in 1825 by Taylor to take the place of its predecessor, which was cracked (DIA 24″ HT 21″). The recast bell was an ancient one and probably the only bell in the Tower originally It weighed 5cwt, 28 lbs. And was inscribed in Gothic letters “Intonas de Coelis Vox Camponoe Michaelis” (O voice of bell Michael thou soundest from the heavens). The bell bore the initial stamp T.B. and was most probably associated with a London founder, Thomas Bullisdon, whose name was retained with the addition of the date 1825, and the names in Latin, of Phillip Hunt, Rector, and William Brown and Thomas Small, Churchwardens.

Number 2 Bell
Has the inscription “God save the King 1650”; several of the letters are upside down or back to front and since this was the period of the Commonwealth and Oliver Cromwell, this may have been deliberate on the part of the Founder. However accidents did occur with inscriptions when they were being set up prior to casting. It is supposed that this bell was founded by James Keene.

Number 5 Bell
Was the original 4th bell being the heaviest and lowest musical note. Dia 32″ ht 24″ Inscription: Thomas Groves and John Langford churchwardens. Made by Thomas Russell of Wooton in 1733.

There is also a Sanctus bell dia. 16.5″ originally cast in 1701 by Richard Chandler and was hung without a clapper as a Clock Bell. It was recast in 1895 to become the present sanctus bell with a clapper fitted.

1996
The 8 bells, which exist today, are hung in the Tower on a cast iron frame which was provided in 1895. Up until 1948 this frame had held 6 bells, also provided in 1895, but two more bells were added in 1948 to complete the octave. All of these bells were cast by Taylors of Loughborough, which is one of only two bell foundries still surviving in the U. K.

Although the 6 heaviest of the 8 bells existing today are only 100 years old, their history goes back a lot further, with both the ancient bell metal being re-used and the ancient inscriptions being carried forward. In 1980 all the bells were returned to Taylors for retuning and were rededicated by the Bishop of Bedford on 8th March 1981. The Octave scale changed from A flat to F sharp.